The head honcho at Wag-n-Train is Marianne Calcutt, who is a wife, mother and garden farmer all at the same time! Her extended family consists of four dogs, six chickens, three ducks, two rabbits, two guinea pigs and lastly not forgetting poor Goldie the solitary fish who often gets overlooked.

Here she describes her love of dogs and the driving force behind Wag-n-Train:

My passion for animals stem from my childhood as far back as I can remember. I hail from the west coast of Scotland and was the youngest child of a family of 6. My father was a great dog lover but not my mother. She felt strongly that having six children was enough work without having pets to boot.

This never ever stopped my quest of seeking animal companionship. I would attach myself to neighbours and relations who were dog owners, bring home any injured bird I found and was always first to volunteer to have the school gerbils for holiday times.

My first dog of my very own arrived at Christmas 1978 and she was wrapped in disappointment. Instead of a surprise border collie my parents had purchased a Cairn Terrier. I named her Tina and she became a much loved family member but she never quite made the grade. One positive that Tina did bring into our lives was that through her my mother realised she too enjoyed being a dog owner and soon became a dog lover herself. Tina became the first of three Cairn terriers to share the family home.

Years passed and when my boys were growing and at school I decided that the time was right to have a Border collie.

The arrival of Wallace about 10 years ago was a shock; a friend tapped the door on a dark winter evening with a bedraggled beaten and starved young collie girl. She was in desperate need of love and attention she had found her forever home. A few years later, Wallace was joined by the handsome Ziggy. He is a nervous chap, although he overcomes this through participating in Flyball, his favourite game.

Please meet Sal, a little black tornado of Labrador. She is 3 years old from working stock, who belongs to a family member but extended doggy-sitting duties from Aunt Marianne is mostly 24-7! She’s just started her career in agility. 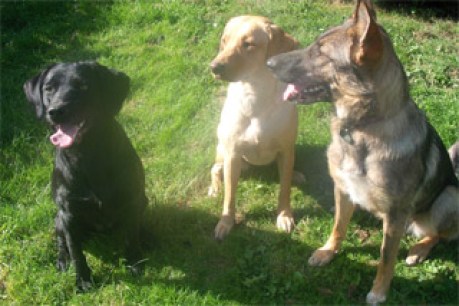 Cash (right) posing with her mates, The Cheeky Girls 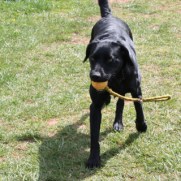 Sal enjoying a walk in the fields

I have spent a lot of time over the past few years helping smaller dog rescues that often get overlooked. I have been involved in home checking, fostering and fund raising. All of which I have thoroughly enjoyed and learned from. I have participated in agility, dabbled in HWTM and competed in Flyball, getting as much pleasure from these sports as the dogs!

A few years ago I attended puppy classes with Ziggy. This is where I met two fabulous trainers in Theresa Franklin and Rachel Yearby who were at that time running classes for a well respected trainer Marie Miller. They opened my eyes to a whole new world of dog training, introducing me to lure and reward methods and the clicker. Looking back, they changed my own and my dog’s lives forever, all for the good!

I no longer taught my dogs to learn by using painful and fearful methods (out went the half check and the bullying) and in came patience understanding and the much loved tone of the clicker. Both me and the dogs have benefited so much.

Theresa spotted a passion in me and when the time was right she invited me to join her and help within her puppy classes. I enjoyed all the aspects of the classes. Both ends of the lead have brought me pleasure. My time spent watching and assisting there has spurred me into perusing more knowledge of the dog world.

I hold good practical skills and believe that I could help make a difference by passing on kind fair training methods to others.

In 2010 I decided to do something which I love and I set up Wag-n-Train along with the rest of our small team.